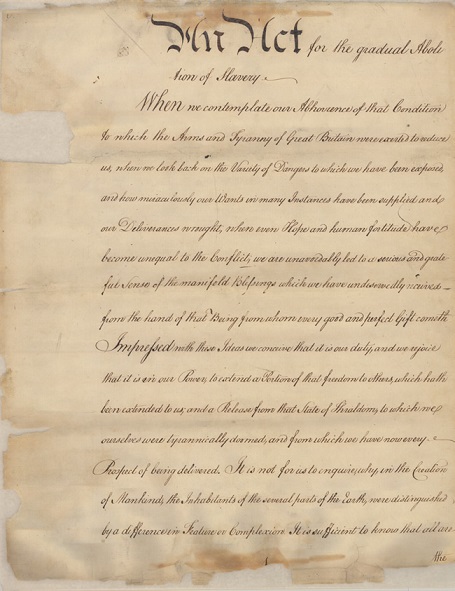 1780 Act for the Gradual Abolition of Slavery

A free Black person who wanted to start a new life in a new state had to be very careful about their choices. While many Northern states made plans to gradually abolish slavery after the Revolution, the timing of those laws varied greatly. And even after gradual emancipation laws were passed, slavery could remain active in a state for up to several decades before the institution was officially eradicated.

For example, the Pennsylvania General Assembly passed an Act for the Gradual Abolition of Slavery in March of 1780. The act did not free enslaved people or make slavery illegal. Under the law, every “negro or mulatto child” born to an enslaved woman would remain enslaved until their 28th birthday. And this only applied to enslaved people born after 1780.

But moving around the North as an anonymous person of color wasn’t without danger. As slavery was ending in the North, it was expanding across the South, and the invention of the cotton gin in 1793 and the explosion of cotton agriculture only increased the demand for enslaved people. Free people of color were susceptible to kidnappers, who would use trickery or force to gain control of a person and transport them for sale. Traveling long distances could mean new opportunities and a new life of freedom, but it also came with incredible risk and could mean the ultimate consequence of returning to slavery.

Move to Philadelphia
Move to New York
Go Back